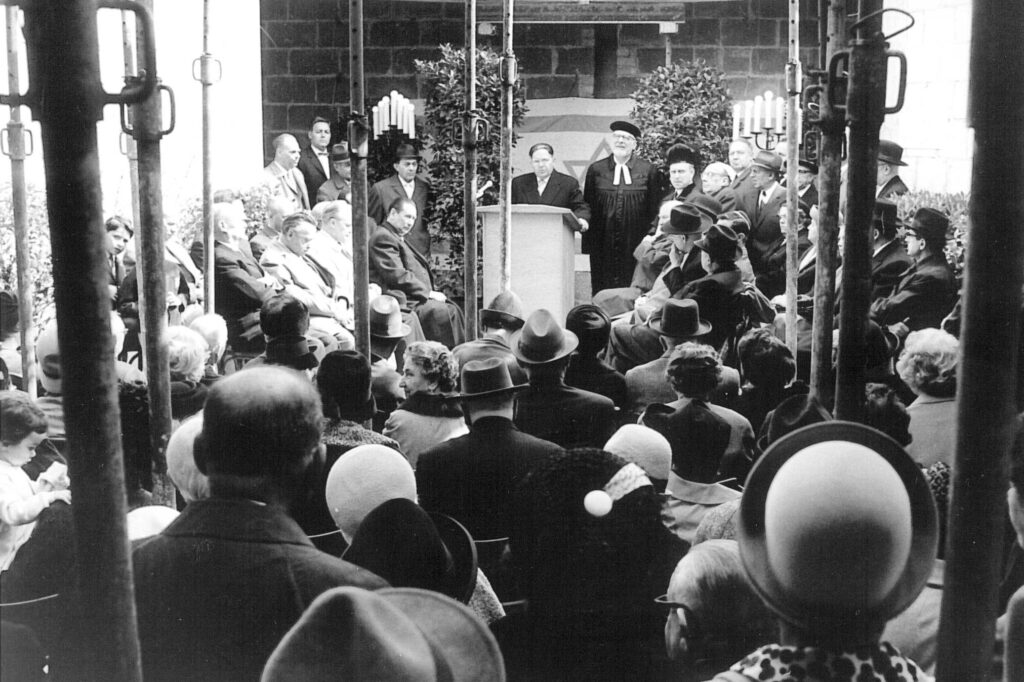 Laying of the foundation stone for the synagogue in 1965

Since the synagogue, which had been rededicated in 1946, required extensive maintenance that the Wiesbaden Jewish Community could hardly afford, the community decided, after long internal discussions, to build a new community center and synagogue.

After the makeshift repairs for the rededication in 1946, the poor state of preservation of the synagogue, built in 1882, did not improved significantly. The board of the Jewish community around Naftali Rottenberg regularly approached the municipal offices in person to solicit financial support for the maintenance work. In the 1959 meeting, the board finally stated that the synagogue was now dilapidated. Because maintenance costs far exceeded the congregation’s financial resources, it finally decided to seek a new building for the commercial building at Friedrichstrasse 31 and the synagogue. In 1963, the Frankfurt architects Ignatz Jakubowitz and Helmut Joos submitted plans for the construction of a new synagogue with a seven-story office and commercial building on the property at Friedrichstrasse 31 and 33, which the magistrate of the state capital Wiesbaden approved in 1964. During the planning phase of the new building, the state capital had already decided to support the Jewish community financially in its project. On November 29, 1963, the Wiesbadener Kurier published a short report on this.

Friedrich Reichmann was largely responsible for the realization of the new building, but he did not live to see its inauguration.

The laying of the foundation stone had to be postponed several times due to the state of health of the chairman of the Wiesbaden Jewish Community, Dr. Friedrich Reichmann. Reichmann, who had been in Wiesbaden since 1960, worked with great commitment on the construction of the new community center and synagogue, which was to adequately meet the needs of the community. Reichmann was not only active in the Jewish community, but was also on the board of the Society for Christian-Jewish Cooperation. The society supported the planned new building and successfully appealed to the citizenry for donations for the community center. Cooperation between the Jewish community and the city was not always smooth. Friedrich Reichmann occasionally engaged in passionate discussions, especially with Lord Mayor Georg Buch, himself a persecutee of the Nazi regime. Board members Leo Keh and Samuel Mandelbaum were able to invite guests to the laying of the cornerstone on April 4, 1965, 11 a.m.

Dr. Reichmann opened the festivities with three gongs. This was followed by speeches by the State Rabbi Dr. Lichtigfeld, the Lord Mayor of the State Capital Wiesbaden Buch, Oberschulrat Dr. Ehrhardt spoke as the representative of the Hessian Ministry of Education, Pastor Götting for the Protestant Deanery and Pastor Jung of Maria-Hilf for the Catholic Church. Wilhelm Freund, chairman of the Society for Christian-Jewish Cooperation, was also asked to speak. Also present was Avigdor Zuker, who was to become the cantor and religious teacher of the Wiesbaden Jewish Community in 1977. The event concluded with the bricking in of the founding charter.

Dr. Friedrich Reichmann did not live to see the dedication of the new synagogue building on September 11, 1966. He died a few weeks earlier. 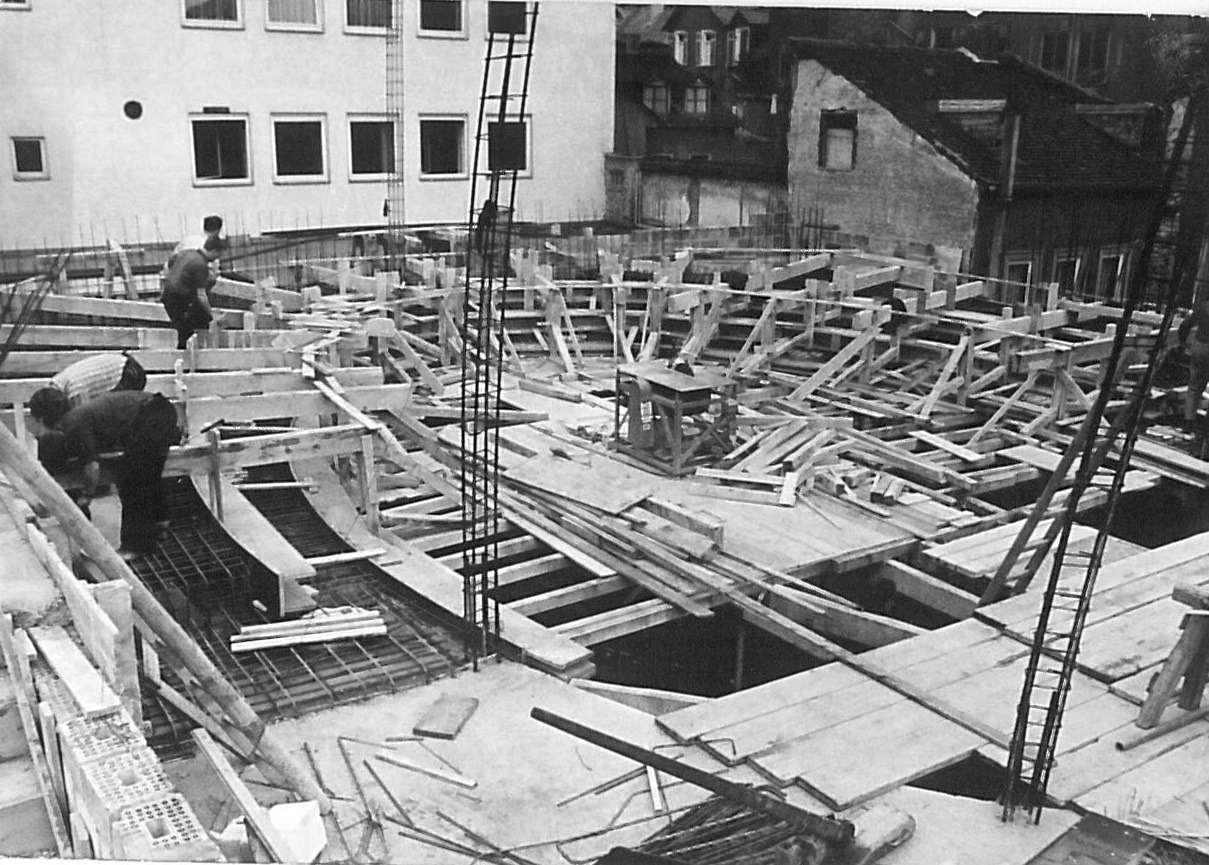 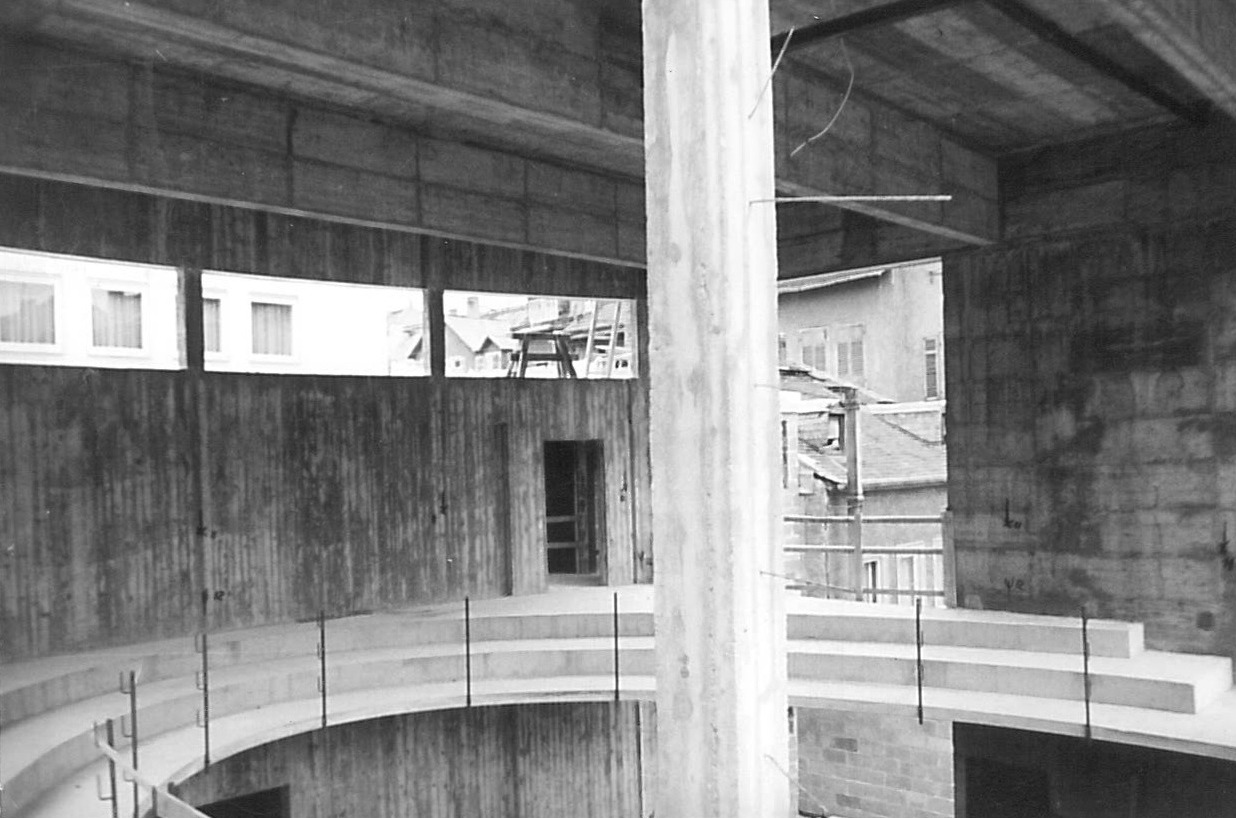 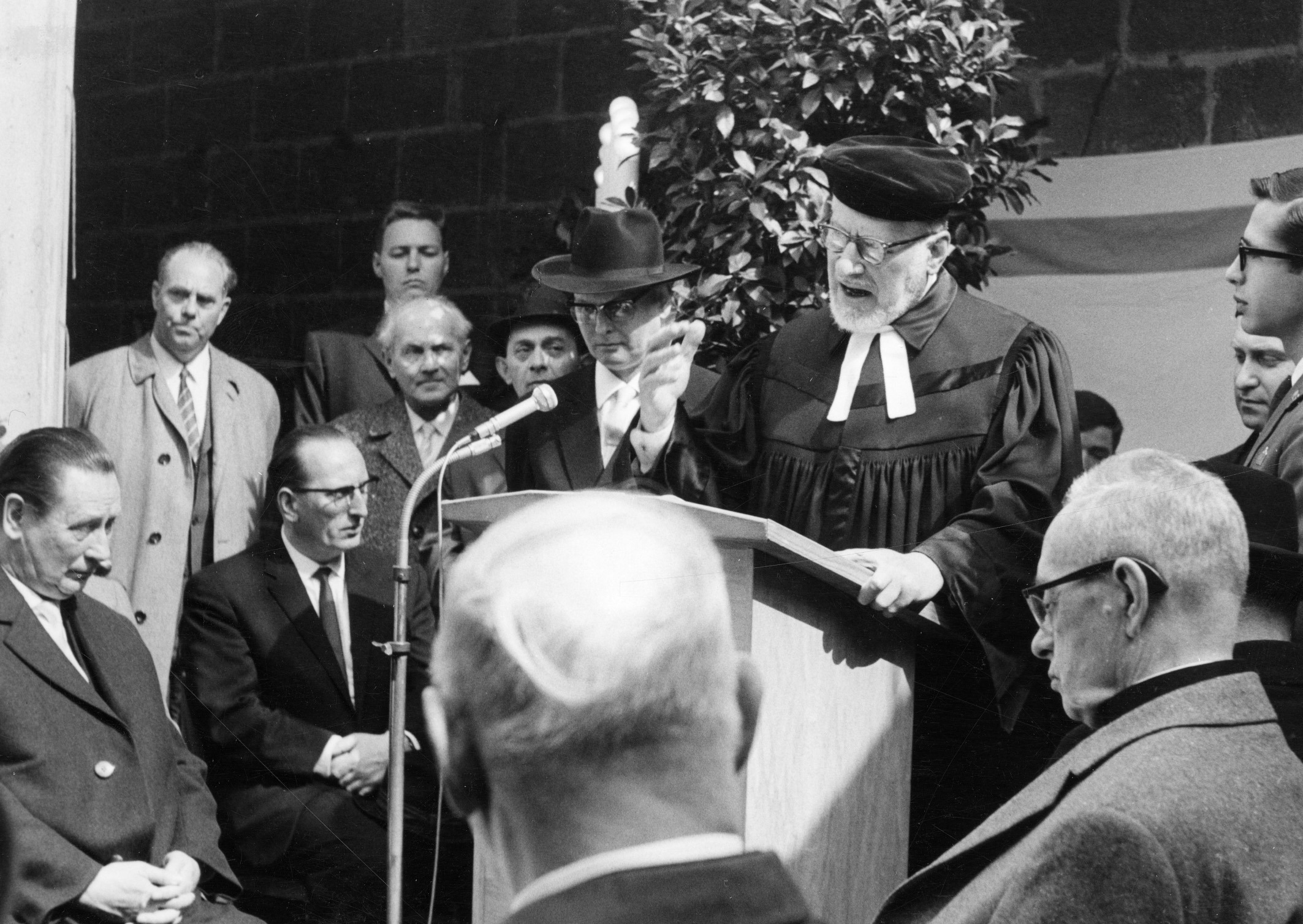 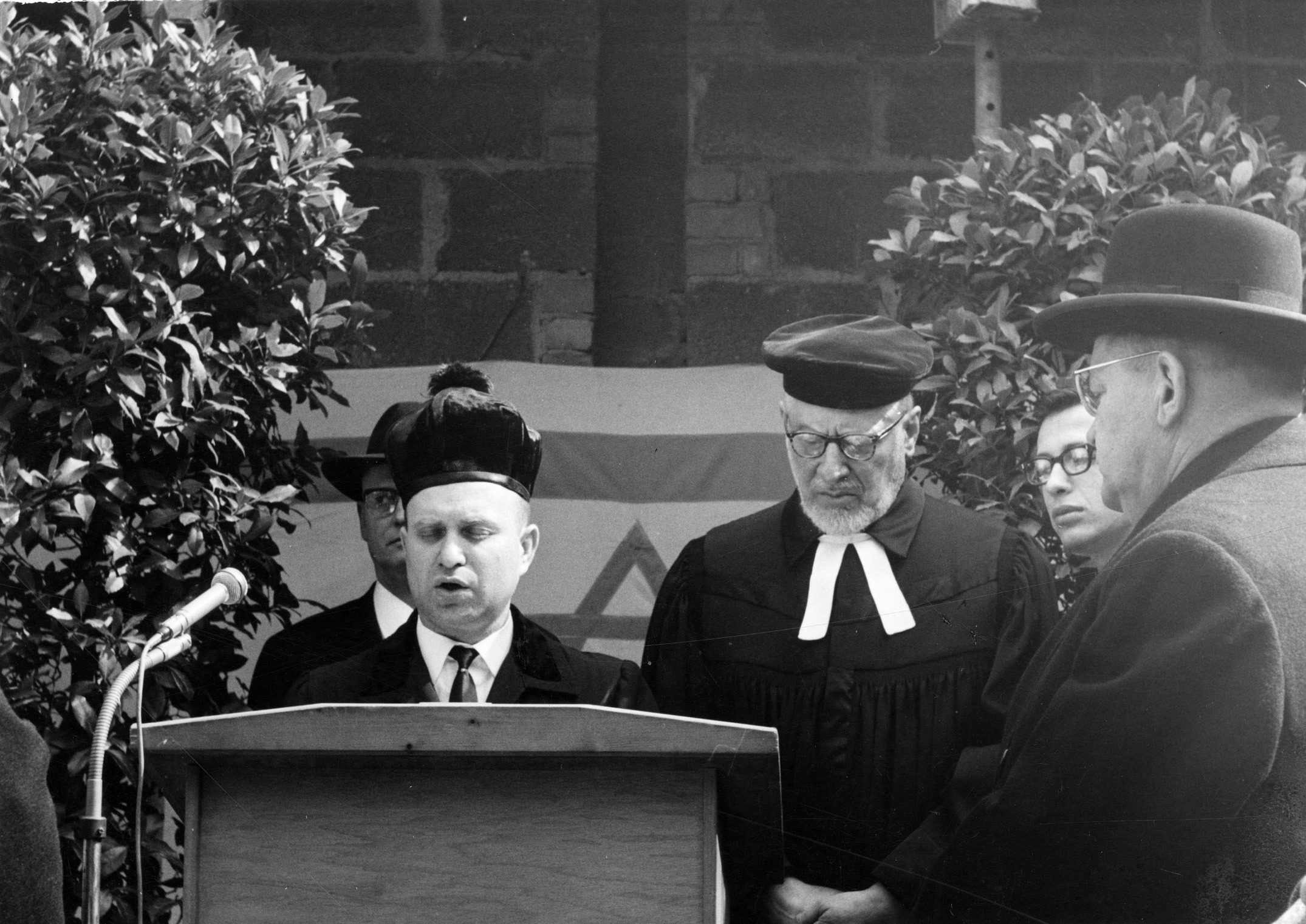 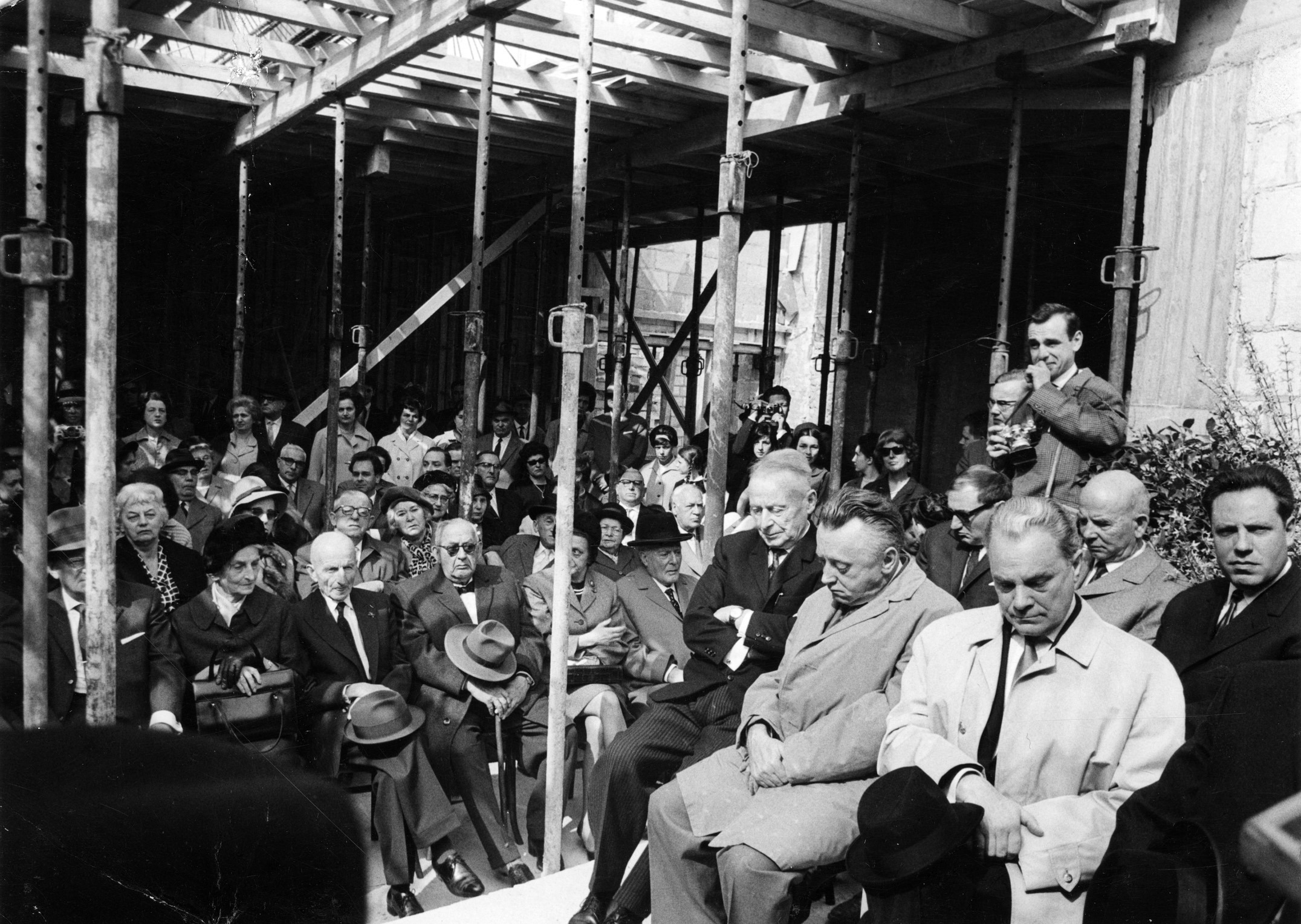 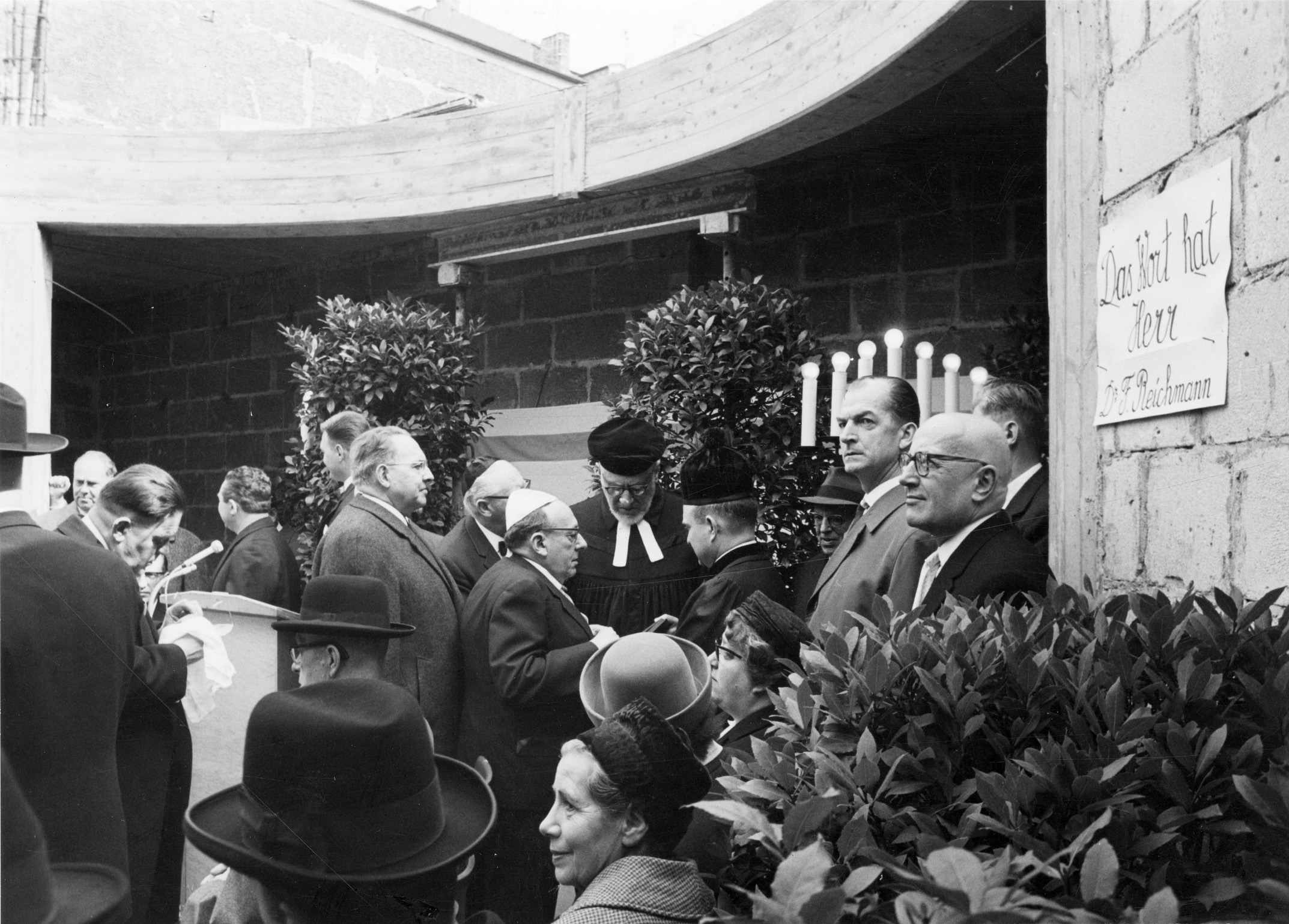 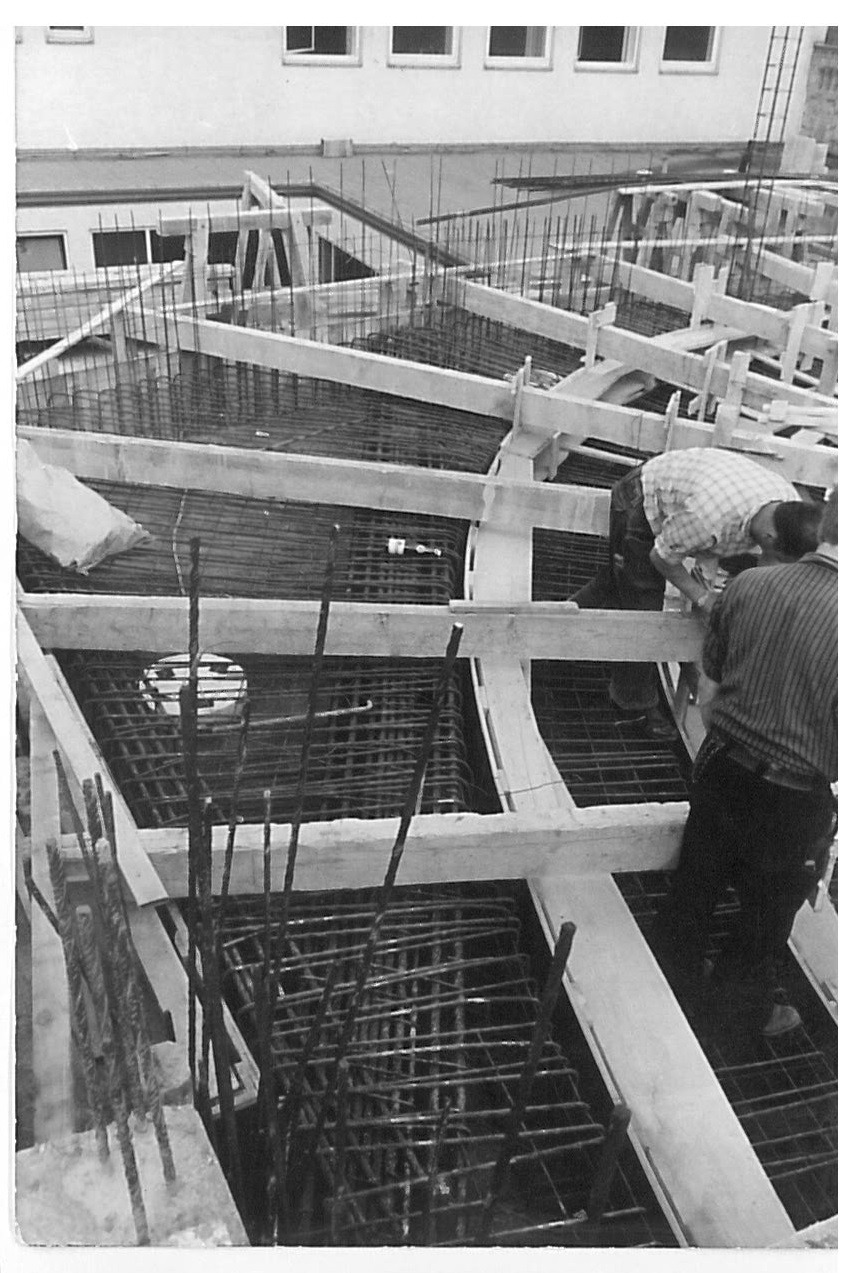