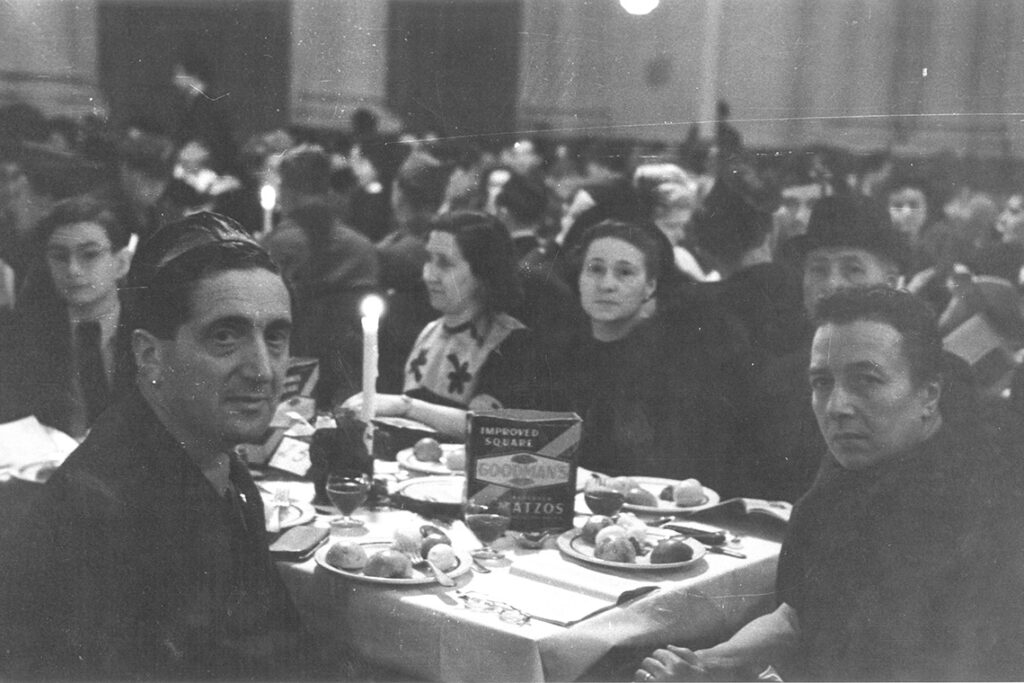 Claire Guthmann provided the impetus for the reestablishment of the Jewish Community of Wiesbaden. Of her family, only her daughter Charlotte had survived the Shoah. Charlotte Guthmann emigrated to the USA, while her mother remained in Wiesbaden and became involved in the Society for Christian-Jewish Cooperation.

The Jews living in Wiesbaden after May 8, 1945 were marked by the persecution by the Nazi regime—years of imprisonment in a concentration camp, flight, expulsion or endurance in hiding. They suffered from deficiency symptoms due to years of starvation and were sick from the hard work they were forced to do. Most of them came alone, because their entire family had been murdered in the concentration camps. They were destitute and severely traumatized.

The Jews who lived in Wiesbaden and not in the DP camp in Zeilsheim near Frankfurt am Main found it difficult to find housing. Although the military government had confiscated living space which was to be made available to the displaced persons, apartments were scarce. Thus, most of the members of the Jewish Community’s board of directors lived together in the unheatable attic of the former Jewish Sisters’ Home at Geisbergstrasse 24, the first business address of the reestablished community from 1945 to 1951 The American military government had made the building available to the Jewish Community shortly after the end of the war for the purpose of its reestablishment. In 1951, the building was sold and the office was ordered to vacate the building by May 31, 1951. The community’s application to provide office space for them near the synagogue was denied by the Hessian Ministry of the Interior, Dept. VI Reparations According to the Compensation Act. The municipality nevertheless succeeded in making the rooms ready for occupancy, and so on June 8, 1951, it announced the establishment of the office at Friedrichstraße 33. 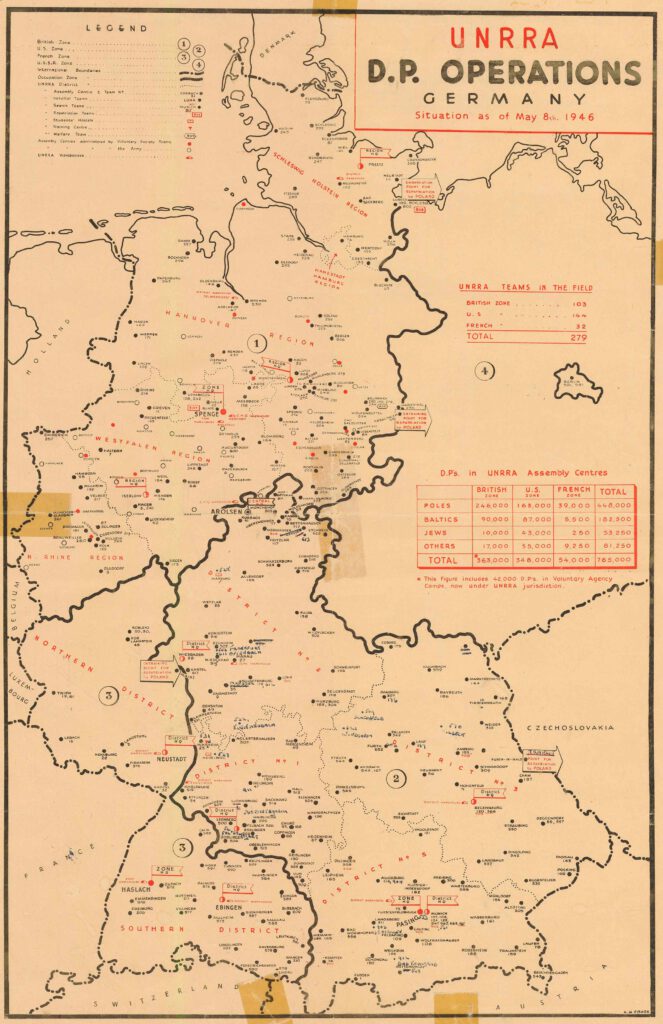 Claire Guthmann headed the office on Geisbergstrasse until the first board elections in 1946. Together with her daughter Charlotte, she had survived the Theresienstadt concentration camp. After the liberation of the concentration camp by the Red Army on May 7, 1945, Claire Guthmann, born in Central Hesse in 1894, and Charlotte Guthmann, born in Wiesbaden in 1925, returned to Wiesbaden in the summer of 1945, which they had been forced to leave for Frankfurt am Main on November 20, 1942. From Frankfurt, Hermesweg 7, they were deported to Theresienstadt on June 17, 1943. Claire and Charlotte Guthmann were the only survivors of the family of four. Attorney Berthold Guthmann and son Paul were murdered in the Auschwitz and Mauthausen concentration camps. Berthold Guthmann was the last chairman of the Jewish “Einheitsgemeinde”. He was also appointed “Juden-Konsulant in Wiesbaden und Umgebung” in 1938. The National Socialists had dissolved the Jewish Community and the Old Jewish Community and incorporated them into the Reich Association of Jews in Germany. Attorney Guthmann had been the only legal counsel for Jews in and around Wiesbaden.

Claire Guthmann and her daughter reached Wiesbaden as displaced persons. They came to DP Camp No. 712 in the Goltz Barracks in Mainz-Kastel. Many of the approximately 400 Jewish DPs housed there were able to leave the camp in the course of 1945, as they had been assigned a room or apartment in Wiesbaden.

Charlotte Guthmann summarized her impressions upon her return to Wiesbaden in her autobiography as follows:

“As I arrived back in my hometown…. I was strangely, disconcertingly alone. Of course I wasn’t attached to my mother, or even under her care or supervision. I’d been on my own far too long for that. But I was overwhelmed by our return, lonely and desolate. Despite the fact that I’d spent seventeen of my twenty years in Wiesbaden, as we drove into town the feeling was as unnerving as had been our arrival at Terezín: I didn’t know what to expect, I wasn’t sure what was expected of me, I was frightened and impossibly alone.“ 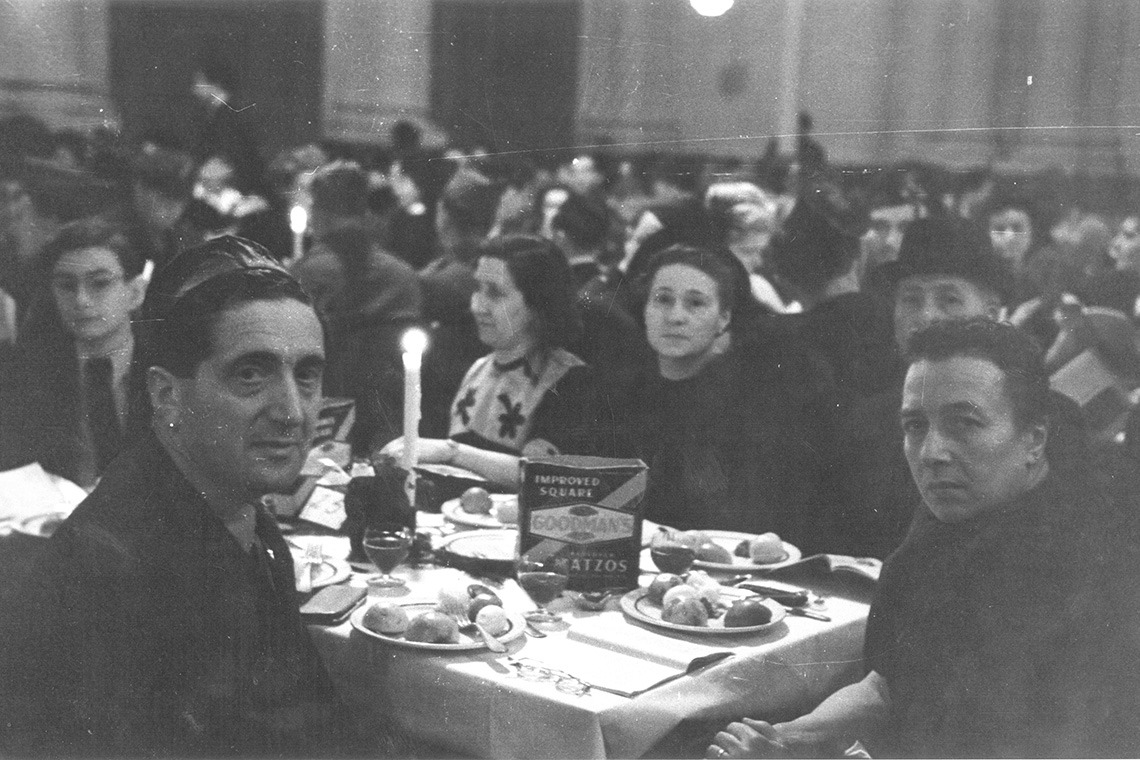 Claire and Charlotte Guthmann tried to build a new life in Wiesbaden. Charlotte, however, never really felt at home. She worked for the American military government and opened an agency that arranged employment with the military government for Germans. Despite the business going well, she decided within a year to emigrate to the United States and left Wiesbaden. Claire Guthmann stayed behind with the firm intention of rebuilding the community and reclaiming her family’s expropriated property. It was she who applied to Rudolf Jesinghaus, the head of the municipal support office for the politically, racially and religiously persecuted, for the resumption of the Jewish community’s business, which at the beginning still operated under the name of Jüdische Kultusgemeinde On October 25, 1945, she signed a letter to Captain Theodore, Military Government, Department of Deportees, as president of the Jewish Community in Wiesbaden. Her duties included representing the interests of the Jewish Displaced Persons (DPs) in Wiesbaden and their personal care, especially those Displaced Persons who had fallen ill and were housed in the Taunusheim Hospital. She made regular visits to the sick. In addition, Claire Guthmann maintained contact with Rabbi Dr. Neuhaus in Frankfurt, who was charged with the religious care of the community in 1945. In order to carry out her duties, which were coordinated with the municipal care office, Claire Guthmann needed a company car and driver. The American military government provided her with both. In January 1946, she resigned from the board of the Jewish Community. However, she continued to be involved in the community. She was one of the people who, on November 17, 1948, founded the Society for Christian-Jewish Cooperation Wiesbaden e.V. (GCJZ). Claire Guthmann died in Wiesbaden in 1957.

The Wiesbaden Society for Christian-Jewish Cooperation was the second of 83 societies which have been founded in Germany. As early as 1953, the Jewish Community of Wiesbaden and the GCJZ cooperated in the commemoration of the November pogroms of 1938. The GCJZ also played a significant role in the construction of the new synagogue and community center in 1966. Through donations, the GCJZ organized a considerable portion of the financial resources needed for the new building.