EARLY MEMORY OF THE SHOAH 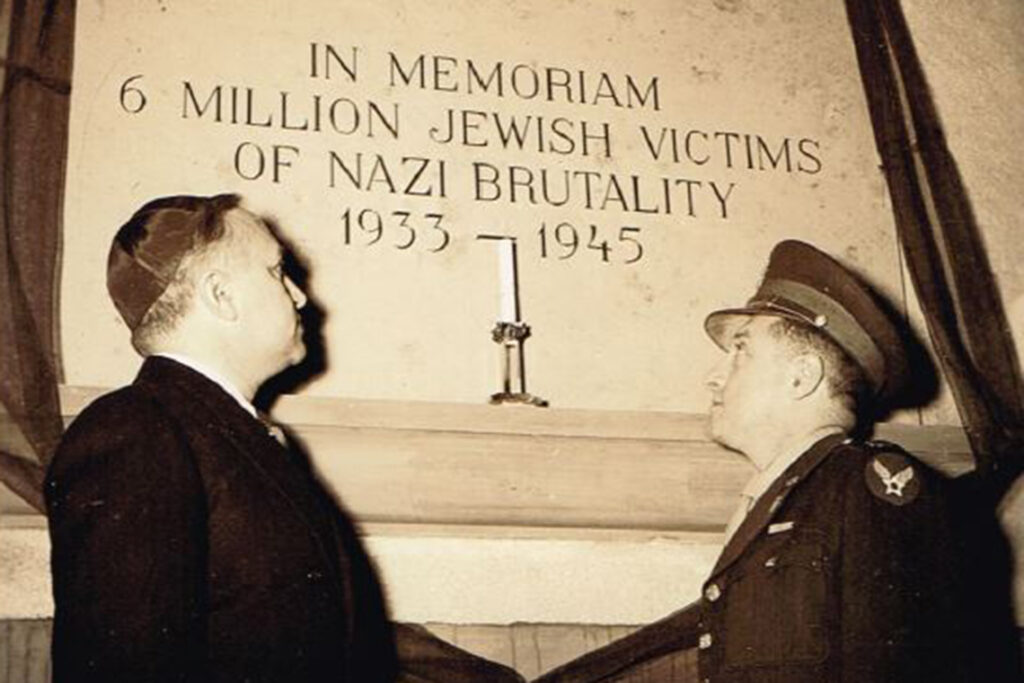 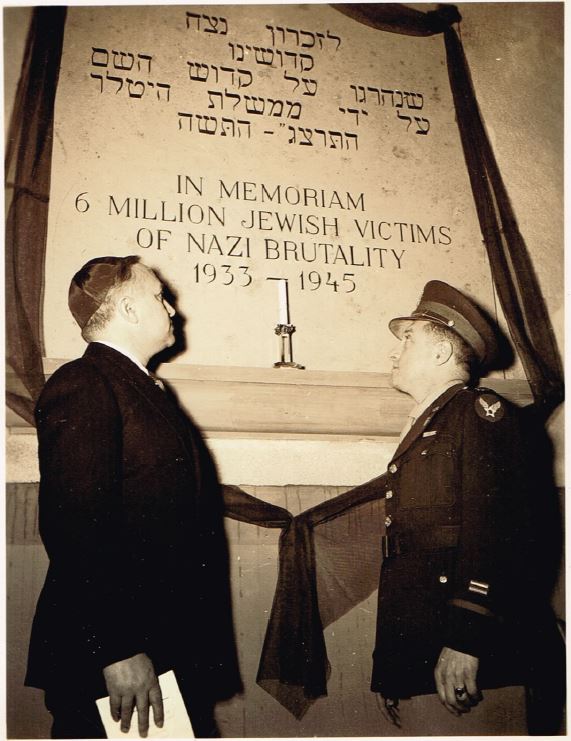 Rabbis Bernstein (left) and William Z. Dalin in front of the memorial plaque in the synagogue in 1946. Collection Ralph Dalin

In 1953, the victims of the Shoah were publicly commemorated for the first time with the erection of a memorial stone and the placement of a commemorative plaque in the Heinrich-Heine-Anlage. Since 1954, the Jewish Community of Wiesbaden, the Society for Christian-Jewish Cooperation and the state capital Wiesbaden have held an annual joint memorial event in remembrance of the November pogroms as the beginning of the Shoah.

The earliest reminder of the victims of the Shoah is a commemorative plaque that was placed at the rededication of the synagogue on Friedrichstraße with the support of the U.S. Army in 1946. It was located in the interior of the synagogue. In 1953, the victims were commemorated for the first time publicly – and thus visibly for the populace – with the erection of a memorial stone and the placement of a commemorative plaque in the Heinrich-Heine-Anlage. The design of the small park at the former site of the old synagogue which was destroyed in 1938 was decided by the city council in January 1947 at the request of the CDU parliamentary group. It was to exist until the synagogue was rebuilt on the Michelsberg. The plan to rebuild the destroyed synagogue had already been approved by the military government. It did not come to fruition. 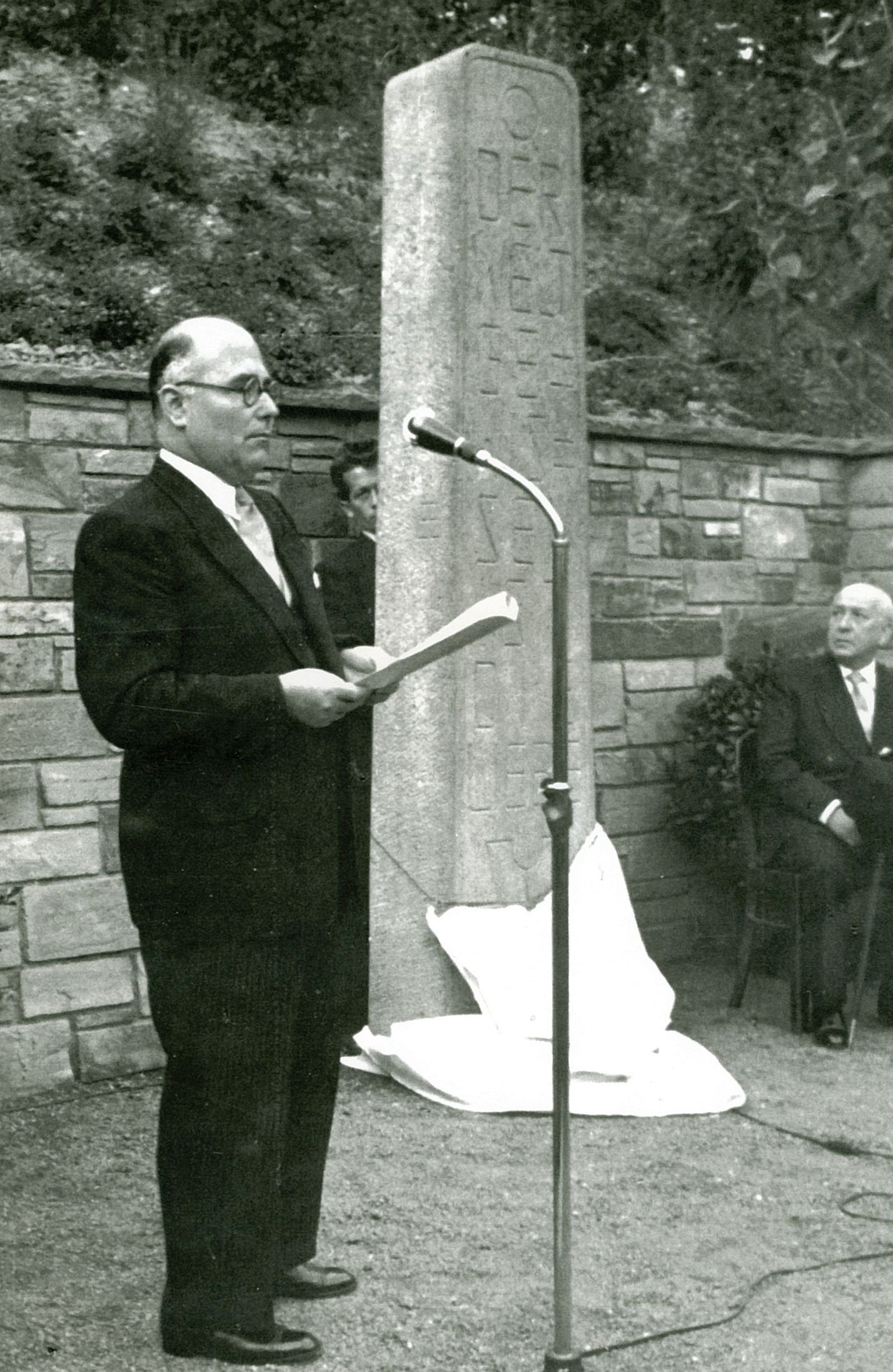 Back right: Naftali Rottenberg at the unveiling of the memorial stele in 1953 on the Michelsberg, Wiesbaden. Collection Jewish Community Wiesbaden 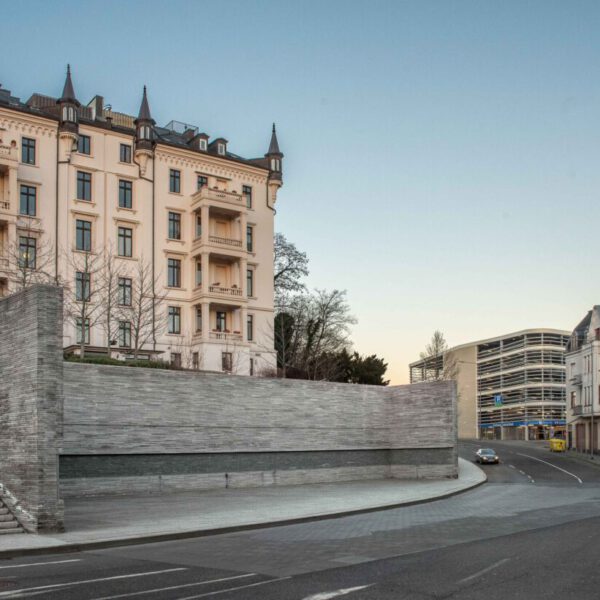 The memorial for the murdered Jews of Wiesbaden in 2020. Photographer: Igor Eisenschtat. Collection Jewish Community Wiesbaden

On April 23, 1953, the city council decided to erect a stele in the area then known as Schlichter’scher Garten. The sculptor Egon Altdorf was commissioned to design the stele, which turned out to be three meters high and weighed one ton. After being released from American captivity, Altdorf, who was born in Pomerania, had come to Wiesbaden in 1946. From 1947 to 1949 he attended the Werkkunstschule in Wiesbaden, where he studied with sculptor Friedrich Roland Watzka. In 1949/50 Altdorf attended the Wiesbaden Freie Kunstschule and from 1949 to 1952 the Staatliche Bau- und Kunstschule in Mainz. Altdorf was to be associated with another project with the Jewish Community of Wiesbaden: He was commissioned to design the interior of the new synagogue on Friedrichstrasse. The windows and parts of the interior are still his largest coherent work of art.

The unveiling of the memorial stone in what is now known as the Heinrich Heine Park took place on August 23, 1953. The program included first an address by Wiesbaden’s Lord Mayor Kluge and then by a representative of the board of the Jewish Community. Attorney Dr. Goldberg spoke on behalf of the board. Also present were Naftali Rottenberg, Ludwig Fries and Roman Mandelbaum. In addition to representatives of the City Council and the Magistrate, Claire Guthmann, Heinrich Mannweiler and Dr. Josef Massenkeil were present for the Society for Christian-Jewish Cooperation. The U.S. Army was also represented at the event.

The Heinrich-Heine-Anlage being the former location of the old synagogue, the annual commemorative events in memory of the November pogroms of 1938 took place there after the installation of the memorial stele. Since 2011, the memorial to the murdered Jews of Wiesbaden has stood at the site.